Effects of Light at Night Exposure during Development on Adult Phenotype 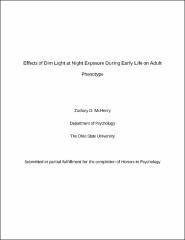 Depressed and anxious affect is related to circadian disruption by nighttime illumination. This phenomenon is evident in adult mice exposed to light at night (LAN), however the behavioral effects of LAN exposure on animals in other stages of development is unknown. Mice were exposed to dim light at night (dLAN) in two developmental stages: gestational and pre-weaning. Then, all mice were maintained in dark night conditions until adulthood. We hypothesized that exposure to early life dLAN alters adult behavior. We predicted that dLAN causes proportionately more negative affective behavioral responses in adulthood. dLAN was further predicted to decrease hippocampal bdnf gene expression in adulthood. The behavioral differences were compared as adults (9 wks) to mice raised in a standard light/dark cycle. Behavioral assays indicate that mice exposed to dLAN during gestation express more anxiety-like behavior than those exposed during the pre-weaning period of development, which was not different from the control group. Mice exposed to early life dim light at night (EL-dLAN) have greater fear memory retention 24 hours following passive avoidance conditioning in comparison to the control animals, but did not differ significantly in measures of non-spatial memory or depression. Gene expression for brain derived neurotrophic factor (Bdnf) was not altered in the prefrontal cortex or hippocampus. The results indicate that exposure to dLAN during early life may contribute to negative affective responses in adulthood. Mice exposed to dLAN during gestation exhibit an anxious phenotype as adults, whereas exposure after birth does not in the elevated plus maze. This indicates that the effects of dLAN on anxiety are long lasting, and there may be critical period in gestation that alters adult anxiety. Increased fear memory retention after early life dLAN exposure may reflect heightened sensitivity to stressors in adulthood.