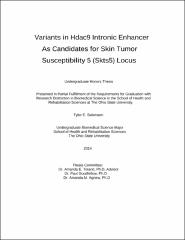 Non-melanoma skin cancers (NMSC) are the most common forms of cancer in the world accounting for nearly half of all cancer diagnoses. Rates of NMSC are on the rise with an over 300% increase in diagnosis of these cancers in the last 20 years. While environmental risk factors for skin cancer such as ultraviolet light (UV) exposure are well understood, little is known about inherited genetic risk factors for these cancers. Mouse linkage studies have identified several loci housing skin cancer susceptibility genes (susceptibility to skin cancer or Skts). Human tumors show evidence of preferential allelic imbalance for polymorphisms in Hdac9, a gene mapping to one of the linkage regions, Skts5. An intron in the Hdac9 gene between exons 8 and 9 was shown by others to contain an enhancer for Twist1 which affects early limb development and phenotypes in the skin. Twist1 is a known regulator of skin differentiation and has a documented role in cancer including metastasis and cell growth. The hypothesis of this study is that this enhancer locus plays a role in the differential risk for NMSC between the cancer susceptible NIH/Ola and cancer resistant Spretus/EiJ mice. To test this hypothesis, we first looked for sequence differences between the strains. Sequence analyses led to the identification of several polymorphisms in this intron which are predicted by multiple in silico methods to disrupt known transcription factor binding. To investigate the in vitro effects of these variants, intron fragments from both NIH/Ola and Spret/EiJ murine DNA were cloned into an enhancer pGL3 reporter vector and transfected into both normal keratinocyte C5N and squamous cell carcinoma A5 cells. Luciferase assay and real-time PCR data suggests these variants are responsible for changes in gene expression, specifically in the Twist1 gene. Chromatin immunoprecipitation studies found that two transcription factors, Gata3 and Oct1, preferentially bind to NIH or Spretus DNA respectively at the enhancer locus, suggesting a possible mechanism for enhancer activity. In summary, variants at the Hdac9 intron 8 enhancer appear to affect Twist1 expression and may explain the skin cancer susceptibility locus Skts5.