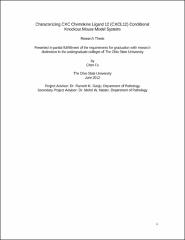 CXC Chemokine Ligand 12 (CXCL12), also known as Stromal Derived Factor 1 (SDF-1), is the cognate ligand of CXC Chemokine Receptor Type 4 (CXCR4), a receptor that is highly expressed in human breast cancer. The CXCL12/CXCR4 signaling axis has been shown to play an important role in breast cancer progression and metastasis. It has been shown in previous studies that CXCL12 accelerates tumor growth and metastasis by modulating tumor stroma, an active element of the tumor microenvironment, via the increased development of carcinoma-associated fibroblasts (CAFs). CAFs, also known as myofibroblasts, are often observed in the stromal tissue of invasive breast cancers and promote angiogenesis through the recruitment of CXCR4-expressing endothelial precursor cells (EPCs). A better understanding of the CXCL12/CXCR4 signaling axis could result in the development of novel strategies to prevent breast cancer growth and metastasis. CXCL12 conventional knockout mice have been previously generated. However, these mice are neonatally lethal, and are thus insufficient models for the characterization of breast cancer growth and metastasis. To circumvent this issue, our lab has begun the process of generating CXCL12 conditional knockout mice by inserting a CXCL12 targeting vector into C57BL/6 mice via blastocyst microinjection, resulting in the development of CXCL12 chimeric mice (CXCL12loxPneo/+). The CXCL12 targeting vector inserted LoxP sequences 1 kb upstream of the start site of the CXCL12 gene, as well as in the second intron, flanking exons one and two of the CXCL12 gene. These CXCL12loxPneo/+ chimeric mice were then crossbreed with C57BL/6 mice and the resulting CXCL12loxPneo/+ non-chimeric progeny were characterized using PCR and Southern Blot analysis. A successful germline transmission was qualitatively indicated by an agouti coat color in the progeny. In order to confirm the germline transmission of the CXCL12 targeting allele, the CXCL12loxPneo/+ mice were breed with SRY-Box Containing Gene 2 – Cre Recombinase (Sox2-Cre) hemizygous mice, resulting in the Cre recombinase-mediated excision of the LoxP-flanked CXCL12 gene coding region throughout the early embryo. The neonatal lethality observed in the resulting progeny indicated that the germline transmission of the CXCL12 targeting allele worked as intended, since neonatal lethality results from the deletion of the CXCL12 gene. After confirming the germline transmission, the CXCL12loxPneo/+ mice were breed with Flippase Reporter (FLPeR) mice to remove the Frt-flanked neomycin resistance (Neo) gene, which can influence the expression of the floxed CXCL12 gene. The removal of the Neo gene from the CXCL12 targeting allele resulted in the generation of CXCL12[loxP/+, FLPeR(+/-)] mice. These CXCL12[loxP/+,FLPeR (+/-)] mice were then interbreed for several generations to generate a sufficiently large population of CXCL12[loxP/loxP, FLPeR(-/-)] progeny; the target genotype of this research project. In future studies, these CXCL12[loxP/loxP, FLPeR(-/-)] mice will be breed with Fibroblast Specific Protein 1 – Cre Recombinase (FSP-Cre) mice in order to delete the LoxP-flanked CXCL12 gene coding region from stromal fibroblasts in a cell/tissue-type specific manner. The deletion of the CXCL12 gene from stromal fibroblasts will result in the generation of neonatally viable CXCL12 conditional knockout mice. These CXCL12 conditional knockout mice will then be used to determine the role of the CXCL12/CXCR4 signaling axis in breast cancer growth and metastasis.