Biomechanics of a Posterior Substituting Knee During a Simulated Squatting Motion 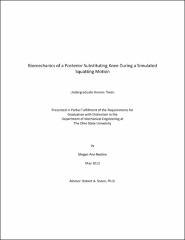 Total knee arthroplasty (TKA) is a common treatment for osteoarthritis (OA). However, there is a large range of postoperative outcomes for TKA patients. Many of these patients find it difficult to perform daily activities such as walking up stairs. Studies have found that error in surgical technique is the most common reason for a revision TKA and may contribute to these undesirable postoperative outcomes. Therefore, establishing the parameters for “optimal” prosthetic component alignment and positioning can help orthopaedic surgeons to ensure a highly functional postoperative outcome for their patients. An important first step in establishing the “optimal” range of alignments is to first determine the effects of malalignment of the femoral and tibial components on knee biomechanics. My research serves as this first step by determining how the alignment of a posterior substituting knee (PS) impacts the biomechanics of the knee during a simulated squatting motion in the Oxford Rig. Over 200 simulations were performed varying the alignment of the femoral and tibial components in 6° varus to 6° valgus, 20° internal to 20° external, and 5° anterior slope to 10° posterior slope. A regression analysis was then completed to determine the relationship between component alignment and outcome variables. The variables that were focused on include MCL, LCL and knee kinematics at 20o and 90o of flexion angle and quadriceps muscle force at 120o. Component alignments with a p 0.05 and coefficients greater than an absolute value of 1 were considered to be significant. From this, it was found that alignment of the tibial component in the frontal plane and the femoral component in both the transverse and frontal planes have the most significant effect on functional outcomes. Further, an equation was found to create an estimated curve for the kinematics. This research suggests that in order to improve functional postoperative outcomes for their patients, surgeons should focus on achieving appropriate femoral alignment in both the transverse and frontal planes and tibial alignment in the frontal plane.