"You Can't take the Sky From Me": An Ethnographic Case Study in Community Construction 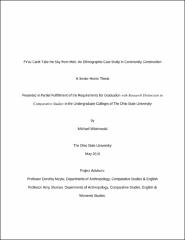 This research proposal begins with the assumption that communities can and do form around a cultural artifact, and are often centered on mass culture, such as television programming. Amongst all genres of television programs and film, Science-Fiction has a unique history and relationship between the producers and consumers of cultural artifacts. I argue that there appears to be evidence of cultural markers of community that form around cultural artifacts, and within these communities there is an amalgamation of the consumer/producer relationship. As such the research proposed would seek to find and document such expressive acts of community forming, and explore their multiplicity of forms, use and meaning in fan communities. Building on existing scholarship, my research will argue that the "Browncoats," a specific fan community organized around the television show Firefly, negotiate a complex communal identity through their expressions of folk culture, which allows them to simultaneously situate themselves as a community, while self-reflexively placing themselves in a context of being both cultural consumers and producers. My research would be accomplished primarily by investigating several expressive aspects within the Browncoat community. This would include such important cultural features as language, art, fiction, and music; however it would not be limited to these characteristics alone. The study would begin by exploring the locus of the community through a deconstruction of the television show Firefly (and its feature film follow-up, Serenity), while situating that analyses within the complex history of its production. After laying a foundation for understanding the artifact at the center of the community, I propose to delve into the acts of expression created by Browncoats at large, using this vernacular culture as a means understanding how the community is formed and what is at stake for those who identify as Browncoats. I would examine how language is used with the fan group, and the context in which language changes may or may not occur. Within my research I would study the "spaces" in which the community organizes itself, including both physical encounters as well as their presence in the online world. This study would also scrutinize elements such as dress, reviewing the origins and production of costumes that are worn by Browncoats, and the context in which they are worn. This research study will conclude by tying together various threads to show the multiple ways in which community is imagined, created, and maintained by a worldwide network of people from a variety of ethnic and socioeconomic backgrounds who self-identify as Browncoats. I will show how these consumers of mass culture, the Browncoats, become in turn producers of a community culture available on a massive scale.