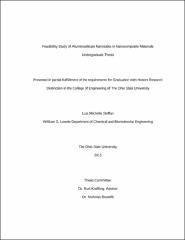 Polymer composite development is a dynamic research area which is often motivated to develop additives and therefore composites with better properties at more economical options. This study was conducted in order to investigate the possible use of aluminosilicate nanotubes as a reinforcement additive for polystyrene. This was suggested because of its promising structure as well as economic implications. Carbon nanofibers were also used as a reinforcement additive in this study for comparison purposes. These composites were formulated with varying loading levels of nanoparticles and tested on a parallel plate rheometer as well as a three-point bend solids analyzer in an effort to determine composite behavior at temperatures both above and below the glass transition temperature of polystyrene. From these tests, viscoelastic properties were analyzed in order to describe the behavior of each composite formulation. Aluminosilicate nanotubes show merit both above and below the glass transition temperature as a possible reinforcement additive in a polystyrene matrix due to their effect on increased performance properties, similar to that of carbon nanofibers. Further study is recommended including possible tensile testing to gauge absolute strength and testing with a wider range of concentrations or repeating analysis with carbon nanotubes, for reference.