Effectiveness of Alcohol as a Do-it-Yourself Treatment to Combat the Bed Bug, Cimex lectularius 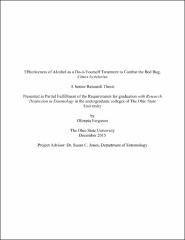 In the past decade, few other insects have made a comeback as great as the bed bug, Cimex lectularius (Hemiptera: Cimicidae). The stigma that generally surrounds bed bugs leaves many victims in a state of mental trauma and unrest, and bed bug infestations can be seen as a taint that many people do not admit to possessing. Furthermore, bed bugs are the most expensive household pest to treat professionally. This has led to increased use of do-it-yourself (DIY) products. Many Ohioans routinely use rubbing alcohol as a primary insecticide alternative. The purpose of our study was to evaluate the effectiveness of commonly available rubbing alcohol (isopropyl) products (50%, 70%, and 91%) and 100% ethanol against bed bugs. Control bed bugs were treated with equivalent volumes of each alcohol product. Untreated bed bugs served as an internal control. Three experiments were conducted using the EPM bed bug strain. In the first experiment adults had been treated with a direct topical application and observed after 24h. Nymphs were sprayed directly during the second experiment and mortality rate was observed. Eggs were also sprayed directly, however egg hatch rate was noted instead of mortality rate. Topical application to adult bed bugs affected fewer than 15% of bugs and none were dead after 24 h. Direct spray application to mixed-stage groups of nymphs resulted in a rate-dependent mortality with the heaviest rate leading to 76.7-100% mortality after 7 days among the alcohol treatments. Spray data for eggs showed that between 63-100% of eggs hatched overall 3 weeks after applications were made. Overall topical application of alcohol to bed bug adults resulted in minimal mortality; however, high rates of alcohol is effective for killing bed bug nymphs when directly sprayed. Limited efficacy was observed for eggs since even at the highest rates, 63% or more hatched within 3 weeks after application. Note that the rates applied in this study represent very high application volumes and may not be practical or safe.