The Design and Fabrication of a 3D Printed Origami Wheel 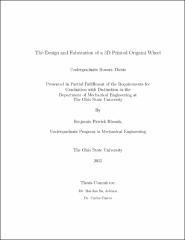 Automobiles are complex machines, in part due to the transmission, suspension, and steering mechanism. By replacing the traditionally static tire with a deformable wheel that dynamically changes radius, the mechanical complexity of these three sub-assemblies can be reduced. Reducing the mechanical complexity lowers the cost and required maintenance of a vehicle, all of which are desirable traits for extraterrestrial rovers. A small proof-of-concept robot was built to demonstrate the feasibility of deformable wheels. A deformable wheel was developed based on the origami ‘spring’ fold pattern pioneered by Jeff Benyon. Benyon's fold pattern consists of several sections that compress when under load and spring back to their original form when the load is removed. To be suitable as a deformable wheel, the origami spring fold pattern was modified to increase contact area with the ground and adjusted to accommodate an axle. The overall theoretical change in radius of the wheel using the modified fold pattern was found to be approximately 50\%. This new origami pattern was used to create the deformable wheels for the proof-of-concept robot. While origami is traditionally performed with paper, paper was not used to create the deformable wheel because it lacks load bearing capacity and has a low fatigue life. Shape Deposition Manufacturing (SDM) and a novel 3D printed manufacturing method were tested to create a laminate suitable for proof-of-concept origami mechanisms. The 3D printed method provided the best results and was scalable to large origami patterns, while the SDM process was not. The 3D printed laminate has an estimated fatigue life of $10^6$ cycles and in testing carried ten times the load of cardstock paper. The proof-of-concept robot successfully changed speed, drove over obstacles, and was able to steer without a dedicated transmission, steering mechanism, or suspension.