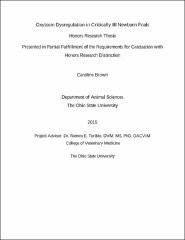 Sepsis is the leading cause of mortality among foals less than one week of age. Previous studies indicate elevated oxytocin in response to sepsis associated stress and decreased concentration with neurological dysfunction in critically ill human neonates, but limited information exists in newborn foals. Neonatal maladjustment syndrome (NMS) occurs in foals during or shortly after parturition, is often associated with septicemia, and is characterized by abnormal neurologic behavior, loss of suckle reflex, depression, and seizures. Objectives of this project were to measure oxytocin concentrations in neonatal foals and examine its association with severity of NMS and likelihood of survival. Newborn foals were categorized into 3 groups based on severity of illness: septic, sick non-septic (SNS), and healthy. Foals diagnosed with NMS were included. Plasma oxytocin concentrations were measured by enzyme immunoassay. Oxytocin concentrations were decreased in septic compared to healthy foals but increased in NMS compared to healthy foals (P<0.05). In our study, decreased oxytocin concentrations were associated with septicemia and mortality, while increased oxytocin was linked to NMS. This is the first study to measure oxytocin in sick newborn foals and to demonstrate an association between this hormone with disease and outcome. This information provides additional insight on the pathogenesis of sepsis and neurological function in newborn foals.