Interview of Ray Bourhis and Sally Lanyon by Tamar Chute 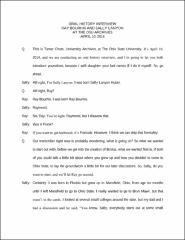 Ray Bourhis and Sally Lanyon describe their roles in the creation of The Ohio State University's mascot, Brutus Buckeye, in 1965: Bourhis, then a New Jersey resident, and Lanyon, who was from Mansfield, both entered as freshmen in the fall of 1963. Bourhis came up with the idea of creating a mascot after noticing that, at the time, Ohio State was one of the few Universities with big football programs that did not have one. Shortly before Homecoming in 1965, he was at the Pi Beta Phi sorority house, where Sally lived, and she and other sorority members were making the sorority's float for that year's parade. They decided to use materials for the float – chicken wire, papier-mâché, etc. – to make a mascot that looked like a buckeye. Then they got it into the football stadium and out onto the field during the half-time show of the Homecoming game. The two friends describe the reaction from the crowd, and the fairly quick transformation to a fiberglass head from the original design, since the original construction materials were heavy, and the papier-mâché could easily be destroyed. They also discuss the naming contest and the ultimate selection of “Brutus” for the mascot name, and Brutus' progression as a mascot over the years. Finally, they discuss their wishes for a 50th anniversary celebration of the mascot, in the fall of 2015.