The Petrologist’s Guide to the Galaxy: A method for modeling terrestrial exoplanets using the MELTS algorithm 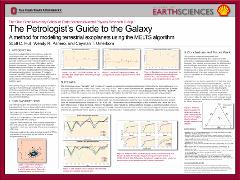 Recent technological advances in exoplanet detection have led to planetary findings on an unprecedented scale and opened the doors to a new area of geophysical inquiry. This inquiry includes both the hunt for Earth-like exoplanets and how planetary chemistry and physical properties vary from star to star. We are currently restricted to considering little more than the planet’s density and the distance from its star, which gives us only a vague insight into these new questions. This study has produced a method for creating a more detailed model of exoplanets using thermodynamic phase-equilibrium computer code and stellar compositions as representatives for exoplanet chemistry. Our findings hold evidence for plate tectonics and implications for core mass percentages, deep water cycles, and the potential for life on these recently discovered worlds. The MELTS algorithm is a petrological modeling software package that is widely used for thermodynamic phase-equilibrium calculations. We tuned MELTS to model exoplanets by producing an Earth-based “bulk silicate planet” and basalt within the program, and then applied these models to various stellar chemistries representative of their average terrestrial exoplanet. Through this process we were also able to determine the core mass percentage of a given exoplanet. The HeFESTo code was then used to model calculate basalt and mantle density changes as a function of depth, which helps to determine the likelihood of basalt-eclogite transitions on a given exoplanet. Using our method, we were able to produce basalt-eclogite transition findings for a sample of six stellar systems. The resulting method from this study will be useful for scientists looking not only for the prevalence of geological activities such as plate tectonics throughout the universe, but also for those hunting for extraterrestrial life by offering a way to determine which stars may harbor Earth-like worlds.