How individual variation in activity influences the transmission of novel information 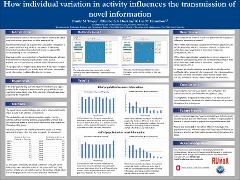 Novel information, such as the location of a food source, can be transmitted throughout a group via social learning, as opposed to direct sampling of the environment. Other information transmission models via social learning have not accounted for the fact that individuals will vary which may influence the rate at which information is transmitted throughout a group. Individuals may vary on personality traits, such as exploration, or the propensity to move around in their environment. The purpose of our model was to determine if individual variation in movement propensity, or activity level, influenced how quickly a novel piece of information was obtained by the entire group. We examined the propensity of an individual to move about its environment and how that influenced the rate of information transfer, compared to a model in which all the individuals were identical. We used an agent based model, in which agents, or individuals, moved around in an artificial environment and interacted with others in their group. We varied the probability each individual would move in a single time step to see how that influenced the speed at which novel information was transferred throughout the group. Results show that the propensity for movement does influence the transmission of social information. In a group of individuals that starts out with one individual in the novel state having a higher probability of movement, the entire group will obtain the novel information faster than if the starting individual in the novel state had a lower probability of movement.