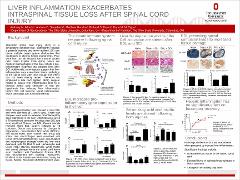 Spinal cord injury (SCI) is a devastating condition that impedes a patient’s motor and sensory function as well as physiological well-being. Epidemiologic research has shown that 10 to 40 people per million in the developed world are affected by SCI. Because the spinal cord innervates all the organs of the body, this terrible injury causes detrimental impairments of the peripheral organs and their regulation. Recent studies have established that the liver is a primary organ to immunologically respond to CNS injury. Prior work from our lab showed that immune system cells called Kupffer Cells (KCs), which are macrophages of the liver, initiate a prolonged pro-inflammatory response after SCI. Some reports in the literature suggest that liver inflammation may exacerbate lesion pathology in the spinal cord. However this has not been directly tested. Our objective for this study is to do a “gain of function” experiment to determine if inducing liver inflammation prior to SCI causes increased spinal inflammation and functional deficits. To cause liver inflammation, a new model needed to be established in the lab. Literature has shown that bile duct ligation (BDL) causes hepatic inflammation. Thus, BDL surgery was performed on Sprague-Dawley rats prior to sacrificing on day 1, 3, or 5 post-BDL. Rats were sacrificed by intracardiac perfusion and tissue was prepared for histological and molecular analysis. RT-PCR for BDL acute time course studies revealed a significant increase in pro-inflammatory cytokines TNF-α, IL-1β, and CD11b at 5 d post-BDL. To test this effect in SCI, another cohort of animals received BDL and 5d later received SCI. At 23 days post-injury, immunohistochemistry revealed that BDL animals had less spared tissue inside the spinal cord to controls. These results are concordant with our hypothesis and pave the way for future inquiry and therapeutically targeting the liver following injury.