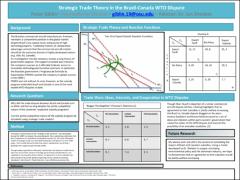 The market for regional jets is an excellent example of imperfect competition as only two firms, Canada’s Bombardier and Embraer of Brazil, compete for market share. In a market with non-cooperative rivalries and imperfect competition, there is an incentive for governments to subsidize the domestic firm and thus increase its profits at the expense of the foreign firm. In the strategic rivalry between Bombardier and Embraer the stakes were so high that both governments filed complaints at the WTO. Although there have been a number of strategic trade studies conducted on competition in the civil aircraft market, no studies have simulated the messy trade war between Canada and Brazil during the 1990s. The purpose of this study is to prove that the subsidy programs run by Brazil and Canada were jointly suboptimal and that the resolution of the dispute via the WTO had positive terms of trade benefits for each country. To evaluate the impact of Embraer’s entrance followed by the reduction of subsidies per the WTO mandated decisions, a calibrated model based off those developed by Baldwin and Krugman (1988) and Baldwin and Flam (1989) will be employed. As this project is still a work in progress the results of the simulations cannot be commented on. However, based off the results of the studies mentioned above, I expect to show a decrease in prices upon Embraer’s subsidized entrance into the market (and thus a terms of trade loss) and an increase in prices after the WTO ordered both sides to reduce their subsidy programs. These results will hopefully simulate the terms of trade losses of the jointly suboptimal subsidy. Through this study I hope to further highlight the overall negative impact subsidies can have on a country’s trade relations and terms of trade.