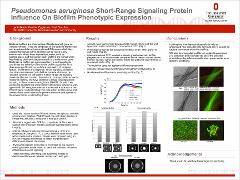 Bacterial biofilms are communities of bacteria which grow on various surfaces. They are composed of the bacteria themselves and an extracellular polymeric slime (EPS) matrix which they encase themselves within. Biofilms can be found in any environment where there is persistent water, such as oceans, pipes, and the human body. Biofilms are formed when free-floating, planktonic bacteria attach to a surface and grow. Cells in a biofilm use communication via cell signaling bacteria to coordinate the behavior of the whole biofilm population for a diverse array of functions, including expression of virulence factors, proliferation and dispersal. In cell signaling, diffusible chemicals are released by individual bacteria which can be “sensed” by others in the biofilm. A short-range cell signaling protein in Myxococcus was discovered to be responsible for social motility in biofilms. We have identified a single potential protein homolog in Pseudomonas aeruginosa, PA4079, for which we are testing to determine social motility differences between a wild-type strain of P. aeruginosa versus a strain with a knockout of the PA4079 gene. Biofilms of both a wild-type strain with green fluorescent protein (GFP) and a PA4079 transposon knockout strain with GFP are grown under various media and temperature conditions. Images have been collected to compare phenotypic differences among the biofilms. Moving forward we will be using time-lapse photography to determine if dispersal rates and motility are affected by this protein. We will also be utilizing a flow cell setup to manipulate biofilms under shear stress. We believe the PA4079 gene and homologs may be responsible for dispersal from pathogenic biofilms and could represent a possible target for treating problematic biofilm infections. With the information provided from this research, we will be able to better understand social motility and cell-signaling of Pseudomonas aeruginosa. Our results could bring forth new ways to treat and prevent pathogenic biofilms within orthopedic environments (i.e implants, reparative surgeries) as well as natural environments.