Assessing the effectiveness of a climate change communication intervention: an experimental study 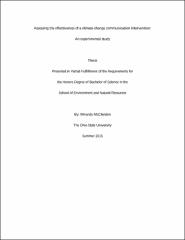 The discussion surrounding climate change has gained momentum and expanded globally. Governments on the local and national level are making a concerted effort to develop action plans and policy frameworks to support climate mitigation and adaptation strategies in the face of increasing variable climate patterns and extreme weather events. Such efforts must be accompanied by effective communication pieces such that the audience is empowered to address the issue of climate change, especially in the political arena. But, how do we know if these communication interventions are effective? The goal of this study was to test the effect of a communication effort targeting four critical beliefs (i.e., climate change is real, human-caused, dangerous - interpreted as risk perception, and solvable - interpreted as efficacy) on public risk perception, individual and collective efficacy, and support for climate mitigation policy. Findings of an experimental study demonstrated that the communication treatment was responsible for change in several dependent variables, yet it was minimal. Instead, pre-dispositions such as environmental values and belief efficacy were most responsible for variance in the dependent variables, indicating that these characteristics might be the key components that future climate change communication message design should emphasize.