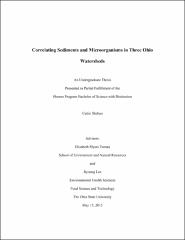 Counties in Eastern Ohio within the Utica-Point Pleasant shale formation have experienced increased development of shale oil and gas. These operations have created areas of bare soil and dirt roads with high volumes of traffic. Soil erosion from these intensely used sites can lead to greatly increased sediment concentrations in waterways. The objective of this project was to examine how sediments in water affect the presence of microbes. The research also contributes baseline data to a larger project assessing the effects of shale development on water quality. Sedimentation has been recognized as the number one impairment of streams in the U.S., bringing with it negative environmental and human health consequences. Sediments may foster and transport bacteria, chemicals and other microbial organisms. The hypothesis of this project was that increased sediment in stream water would correlate with increased detection of E. coli. Baseline testing for cyanobacteria was also conducted. It was predicted that changing aquatic conditions including sediment levels caused by shale development would contribute to a shift in the aquatic cyanobacteria communities and be favorable to the species M. aeruginosa. The three adjacent watersheds for this study are located within The Ohio State University, Eastern Agricultural Research Station (EARS) in Noble County, Ohio. The site historically was mined for coal in the 1960s, but was reclaimed through the 1990s and is currently a site for livestock research. Most of the EARS property is contained within a larger basin that drains directly to the municipal water reservoir for the city of Caldwell, Ohio. Water samples were collected five times from each watershed and tested for turbidity, E. coli, phycocyanin and chlorophyll a. Additionally, real-time qPCR was used to detect genetic markers for human specific fecal contamination, ruminant specific fecal contamination, the phycocyanin intergenic spacer region (PC-IGS) of Microcystis aeruginosa and the microcystin synthetase gene A (mcyA) of Microcystis aeruginosa. Finally, microcystin was tested using ELISA. Results show correlations between high turbidity and high E.coli counts (R2=0.50, p = 0.032). A similar linear relationship between turbidity and chlorophyll a was also found (R2 = 0.59, p = .04). Microcystis aeruginosa and microcystin were not detected. Further microbial profiling is recommended to gather more information on the overall microbial community structure in conjunction with their transport via sediments.