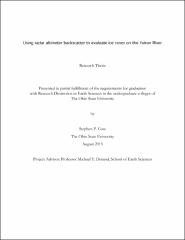 Use of radar altimetry for measuring fresh water systems is a blossoming area of research that has great potential to develop science’s understanding of this precious human resource. The field of satellite altimetry has benefitted from enormous gains since the 1970s. With the launch of GEOS 3 in 1975, humanity began a quest to achieve an understanding of the hydrosphere on a scale previously thought impossible. Though historically the focus of altimetry missions has been studying the ocean, hardware advances have allowed use of satellite altimetry at much higher resolutions, making study of inland waters a possibility. One underlying challenge is to establish a reliable way to determine whether an altimeter is measuring the intended target when used for inland study; surface water measurement, for instance, is confounded by ice coverage, particularly at high latitudes. To overcome this obstacle, Landsat satellite imagery was used to isolate Jason-2 altimetry data from the Yukon River. An altimeter measurement of radar backscatter (how much of the original signal was collected after surface reflection), σ_0, was extracted from the Jason-2 data set, while relative ice cover was determined visually from the Landsat image. σ_0, or the backscatter coefficient, is a metric for the portion of the original radar signal that is returned to the satellite. Water typically returns a much higher reading than ice or land. By manually matching relative ice cover to measured σ_0 values, we propose to create a standard curve for σ_0, with the long term goal of automating the process of determining relative ice cover by removing the need for direct observation. While this project has had promising findings and has identified a traceable seasonal pattern in σ_0, we have demonstrated that to determine a one- to-one relationship between ice and backscatter will be challenging. Notable findings include that there were no scenes without complete ice cover with σ_0 readings below 8.6dB. The mean σ_0 reading during ice cover was 17.6dB, with a standard deviation of 8.67 dB. The data were highly skewed toward lower end of the range, but had a lengthy tail of measurements that extended well into σ_0 values that would be expected from liquid water. The majority of data from fully frozen scenes is grouped around 13.3 dB. In fact 72% of the data fell within one standard deviation of that value. In the case of completely thawed scenes, the mean value was 37.08 dB, with a standard deviation of 10.07 dB. This grouping is not very tight making a confident classification based only on σ_0 difficult. . Melting ice frequently resembles water in terms of its backscatter signature while maintain enough coverage to obstruct hydrologically valid measurements. A seasonal pattern in σ_0 has been observed, though it is not yet well enough defined to be used for ice classification