The Democratic Legitimacy of Border Coercion: Freedom of Association, Territorial Dominion, and Self-Defense 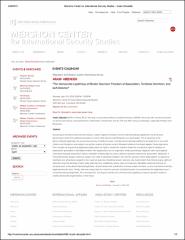