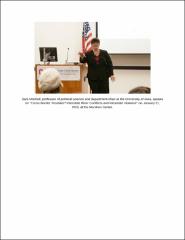 Mitchell examines the relationship between interstate river conflicts and intrastate violence such as riots, strikes, demonstrations, and civil wars in the Western Hemisphere, Western Europe, and the Middle East.  Interstate disagreements over cross-border river basins increase the potential for intrastate conflict by creating unequal access to water resources, displacing populations due to damming and diversion projects, and increasing demands for freshwater as population growth occurs.Mitchell finds that states that experience more interstate conflicts over shared river basins are at a higher risk for multiple forms of intrastate conflict, raising the risk of internal conflict by as much as 800 percent. Water quantity issues tend to be the strongest factor increasing domestic conflict, while navigational, water quality, and irrigation issues have little influence on civil conflict. Armed conflicts and civil wars are more likely to occur in situations of ethnic dominance when countries also contest water issues with their riparian neighbors.