The Uses of Vietnam War: U.S. Policy and the Vietnam Analogy 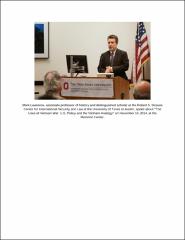