Back to the Future? Battlefield Nuclear Weapons in South Asia 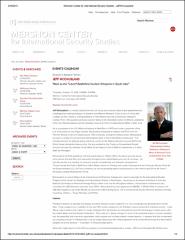 Pakistan's decision to develop and deploy so-called "tactical nuclear weapons" is a new and dangerous development in South Asia.  These weapons are in addition to the over 100 nuclear weapons in the Pakistani arsenal aimed at its historical enemy – India.  Many experts believe this is part of a larger strategic effort by Pakistan to eventually become the third largest nuclear power after the United States and the Russian Federation.  This could be a "game changer" in terms of the potential impact on crisis escalation and the possibility that a terrorist organization could acquire one of these smaller nuclear devices.  It appears that this is motivated by a growing concern in Pakistan that it can no longer keep pace with India's expansion of its conventional forces and New Delhi’s adoption of a new doctrine – "Cold Start" or Proactive Operations.  Where this might lead in terms of future weapons or doctrinal developments is unclear.  Still former President Bill Clinton once described the border between India and Pakistan as the "most dangerous place on the planet Earth," and this development makes it more dangerous.  It is imperative that the United States in concert with allies seek to dissuade Pakistan from this policy or at a minimum acquaints the Pakistani military with the potential problems that will undoubtedly occur.