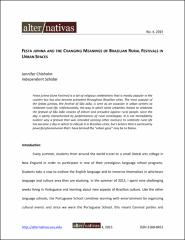 Festa junina (June Festival) is a set of religious celebrations that is mostly popular in the country but has also become prevalent throughout Brazilian cities. The most popular of the festas juninas, the festival of São João, is seen as an occasion in urban centers to celebrate rural life. Unfortunately, the way in which some urbanites choose to celebrate the festival of São João smacks of elitism and prejudice against rural people, since the day is partly characterized by performances of rural stereotypes. It is not immediately evident why a festival that was intended (among other motives) to celebrate rural life has become a day in which to ridicule it in Brazilian cities, but I believe that a particularly powerful phenomenon that I have termed the “urban gaze” may be to blame.