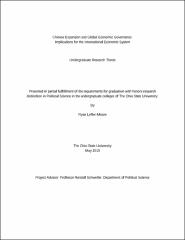 The unprecedented economic development of China has the potential to drastically alter the international system as we know it. The current global economic order no longer reflects the underlying distribution of power: the United States and the West have declined relative to China and the Rest. Global economic governance (the set of international institutions and norms) relies on the support of most (if not all) major powers. How China's rise will affect these structures is thus a cause for concern. This paper posits four different conceivable worlds, and attempts to examine the ramifications each will have on global economic governance. Drawing heavily on the works of Daniel Drezner, Jonathan Kirshner, and offensive realist theory, this paper finds that, while intentions remain unknowable, there are contemporary indicators upon which scholars can examine future developments.

Won the Henry R. Spencer Award from the Department of Political Science
Won "Outstanding Paper" award from the 12th Annual All Politics is Local conference