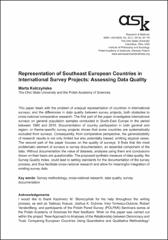 This paper deals with the problem of unequal representation of countries in international surveys, and the differences in data quality between survey projects, both obstacles to cross-national comparative research. The first part of the paper investigates international surveys on general population samples conducted in South-East Europe in the period between 1990 and 2010. Documentation of country participation in both general and region- or theme-specific survey projects shows that some countries are systematically excluded from surveys. Consequently, from comparative perspective, the generalizability of research results is not only limited but also potentially biased, omitting atypical cases. The second part of the paper focuses on the quality of surveys. It finds that the most problematic element of surveys is survey documentation, an essential component of the data. Without documentation the value of datasets, analyses using them and conclusions drawn on their basis are questionable. The proposed synthetic measure of data quality, the Survey Quality Index, could lead to setting standards for the documentation of the survey process, and thus facilitate cross-national research and allow for meaningful integration of existing survey data.