Estimating Support for Extremism and Its Correlates: The Case of Pakistan 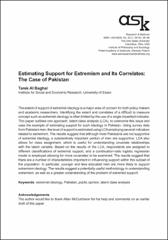 The extent of support of extremist ideology is a major area of concern for both policy makers and academic researchers. Identifying the extent and correlates of a difficult to measure concept such as extremist ideology is often limited by the use of a single imperfect indicator. This paper outlines one approach, latent class analysis (LCA), to overcome this issue and uses the example of estimating support for such ideology in Pakistan. Using survey data from Pakistani men, the level of support is estimated using LCA employing several indicators related to extremism. The results suggest that although most Pakistanis are not supportive of extremist ideology, a substantively important portion of men are supportive. LCA also allows for class assignment, which is useful for understanding covariate relationships with the latent variable. Based on the results of the LCA, respondents are assigned to different classifications of extremist support, and a continuation-ratio logistic regression model is employed allowing for more covariates to be examined. The results suggest that there are a number of characteristics important in influencing support within this subset of the population. In particular, younger and less educated men are more likely to support extremism ideology. The results suggest a potentially useful methodology in understanding extremism, as well as a greater understanding of the problem of extremist support.