Popular Perceptions of Actual and Just Earnings: A Questionnaire Experiment 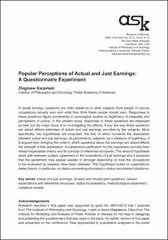 In social surveys, questions are often asked as to what subjects think people in various occupations actually earn and what they think these people should earn. Responses to these questions figure prominently in sociological studies on legitimacy of inequality and perceptions of justice. In the present study, responses to these questions are employed as well, but the major focus is on investigating the effects, if any, the way these questions are asked affects estimates of actual and just earnings provided by the subjects. More specifically, two hypotheses are proposed, the first of which concerns the association between actual and just earnings, as perceived by subjects, as a measure of legitimacy. It is argued that changing the order in which questions about the earnings are asked affects the strength of this association. A substantive justification for this hypothesis borrows from reward expectation theory and its concept of referential structures. The second hypothesis deals with between-subject agreement in the evaluations of just earnings and it proposes that the agreement may appear weaker or stronger depending on how the occupations to be evaluated by subjects have been selected. This hypothesis builds on expectations states theory, in particular, on status-processing principles in status-inconsistent situations.