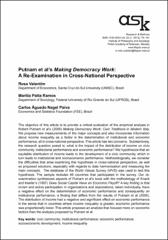 The objective of this article is to provide a critical evaluation of the empirical analysis in Robert Putnam et al’s (2005) Making Democracy Work: Civic Traditions in Modern Italy. We propose new measurements of the major concepts and also incorporate information about income inequality as a factor in the determination of institutional and economic performance, all in cross-national perspective. This article has two concerns. Substantively, the research question posed is: what is the impact of the distribution of income on civic community, institutional performance and economic performance? We hypothesize that an equitable distribution of income leads to the development of a civic community, which in turn leads to institutional and socioeconomic performance. Methodologically, we consider the difficulties that arise examining this hypothesis in cross-national perspective, as well as proposed solutions, especially with regards to data harmonization and measuring the main concepts. The database of the World Values Survey (WVS) was used to test this hypothesis. The sample includes 49 countries that participated in the survey. Our reexamination synthesizes aspects of Putnam et al’s book with the methodology of Knack and Keefer’s (1997) Does Social Capital Have an Economic Payoff? A key finding is that civism and active participation in organizations and associations, taken individually, have a negative effect on the determination of economic performance and consequently on institutional performance, a finding that differs from the results of Putnam et al (2005). The distribution of income had a negative and significant effect on economic performance in the sense that in countries where income inequality is greater, economic performance was proportionally lower. This article proposes an analysis that focused more on economic factors than the analysis proposed by Putnam et al.