On the Limits and Possibilities of Causal Explanation with Game Theoretical Models: The Case of Two Party Competition 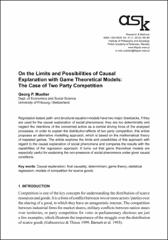 Regression-based path- and structural equation-models have two major drawbacks, if they are used for the causal explanation of social phenomena: they are too deterministic and neglect the intentions of the concerned actors as a central driving force of the analysed processes. In order to explain the distribution-effects of two party competition, this article proposes an alternative modelling approach, which is based on the mathematical theory of repeated games. The article explores the limits and possibilities of this approach with regard to the causal explanation of social phenomena and compares the results with the capabilities of the regression approach. It turns out that game theoretical models are especially useful for explaining the non-presence of social phenomena under given causal conditions.