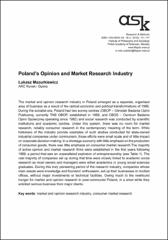 The market and opinion research industry in Poland emerged as a separate, organized area of business as a result of the radical economic and political transformations of 1989. During the socialist era, Poland had two survey centres (OBOP – Ośrodek Badania Opinii Publicznej, currently TNS OBOP, established in 1958, and CBOS – Centrum Badania Opinii Społecznej operating since 1982) and social research was conducted by scientific institutions and academic centres. Under this system, there was no room for market research, notably consumer research in the contemporary meaning of the term. While historians of the industry provide examples of such studies conducted for state-owned industrial companies under communism, those efforts were small scale and of little impact on corporate decision-making. In a shortage economy with little emphasis on the production of consumer goods, there was little emphasis on consumer market research. The majority of active opinion and market research firms were established in the first years following 1989, a period that saw an unparalleled explosion of entrepreneurship (see Table 1). The vast majority of companies set up during that time were closely linked to academic social research as most owners and managers were either academics or young social sciences graduates. During this truly pioneering period of the research industry, companies whose main assets were knowledge and founders’ enthusiasm, set up their businesses in modest offices, without major investments or technical facilities. Owing much to the newfound hunger for market and opinion research in post-communist Poland, in a short while they solicited serious business from major clients.