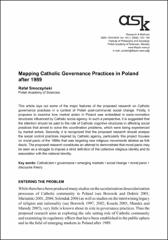 This article lays out some of the major features of the proposed research on Catholic governance practices in a context of Polish post-communist social change. Firstly, it proposes to examine how market action in Poland was embedded in socio-normative structures influenced by Catholic social agency. In such a perspective, it is suggested that the attention should be paid to the role of Catholic cognitive structures in affecting social practices that aimed to solve the coordination problems, which were being experienced by market actors. Secondly, it is recognized that the proposed research should analyse the social control practices inspired by Catholic agency, particularly this project focuses on moral panic of the 1990s that was targeting new religious movements labeled as folk devils. The proposed research constitutes an attempt to demonstrate that moral panic may be seen as a struggle to impose a strict definition of the collective religious identity and its association with the national identity.