How Does Length of Fieldwork Period Influence Non-Response? Findings from ESS 2 in Poland 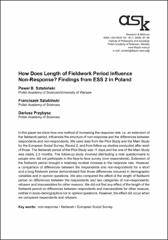