Non-Response Bias in Cross-National Surveys: Designs for Detection and Adjustment in the ESS 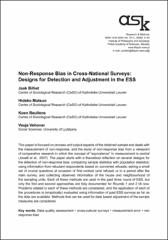 This paper is focused on process and output aspects of the obtained sample and deals with the measurement of non-response, and the study of non-response bias from a viewpoint of comparative research in which the concept of “equivalence” in measurement is central (Jowell et al., 2007). The paper starts with a theoretical reflection on several designs for the detection of non-response bias: comparing sample statistics with population statistics; using information from reluctant respondents based on converted refusals; asking a small set of crucial questions at occasion of first contact (and refusal) or in a period after the main survey, and collecting observed information of the house and neighbourhood of the sampling units. Each of these methods are used in the past three round of ESS, but only the first and second approaches are fully documented for Rounds 1 and 2 till now. Problems related to each of these methods are considered, and the application of each of the procedures is (empirically) evaluated using information of past ESS surveys as far as the data are available. Methods that can be used for data based adjustment of the sample measures are considered.