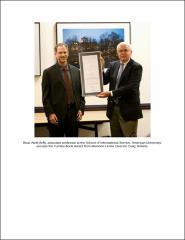 In this talk, Boaz Atzili seeks to bridge the gap in the literature by studying the case of the Federal Republic of Germany (FRG) and its policy's coming to terms with its territorial losses post World War II. He concentrates on German land east of the Oder-Neisse line, which was annexed by Poland and Russia in the Potsdam Conference of 1945. In the early years of the FRG, both policy and public discourse strongly opposed the acknowledgment and acceptance of the new border. By the time of Germany's reunification in 1990, however, the opposite was true. Today, even the remnants of the territorial revisionists in Germany are careful not to pronounce their territorial positions publicly. The pendulum of Germany's border discourse has now swung to the other side: Germany accepted the unacceptable. Atzili uses this case study to develop a general theoretical argument about border politics in international relations, based on interaction between domestic politics and discourse, foreign policy, and international norms.