Are Non-Respondents Similar to Respondents? Findings from the ESS-2004 in Poland 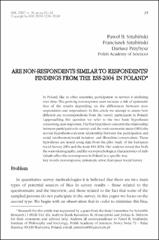 In Poland, like in other countries, participation in surveys is declining over time. The growing non-response rates increase a risk of systematic bias of the results depending on the differences between non-respondents and respondents. In this article we attempt to assess how different are non-respondents from the survey participants in Poland. I approaching this question we refer to the two basic hypotheses concerning non-responses. The first hypothesis concerns the relationship between participation in surveys and the socio economic status (SES); the second hypothesis concerns relationship between the participation and social involvement/social isolation, and liberalism/conservatism. These hypotheses are tested using data from the pilot study of the European Social Survey 2004 and the main ESS 2004. Our analyses reveal that both the socio-demographic and the socio-psychological characteristics of individuals affect the non-response in Poland in a specific way.