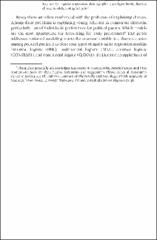 Analyses presented in this paper aim at testing demographic cues hypothesis, which explains voting behavior as a function of the distance between the voter and the object of the vote, expressed as demographic similarity. Four types of multivariate regression models–binomial logistic (BNL), multinomial logistic (MNL), contrast logistic (CONTRAST), and conditional logistic (CLOGIT)–are applied to explain vote choice among Polish parties in the 1997 parliamentary election. For all models I use survey data combined with information on political parties derived from characteristics of the electoral candidates. The results demonstrate that for testing demographic cues hypothesis CLOGIT and BNL are the most advisable options in terms of elucidation of the regression coefficients; MNL and CONTRAST involve cumbersome interpretation and their fit to the theory is questionable.