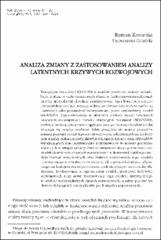 Traditional approach to analysis of change (MANOVA) was based on assumption that change consists of series of quantum differences in functioning of individuals--looked at in terms of arbitrary measurement moments. Such approach refers to model of average change where inter-individual differences are regarded as being "not explained" in MANOVA model. I present here model of latent developing curves which is extension of MANOVA--change is defined here as a continuous process assuming some difference between individuals. This model allows to carry out test of hypotheses on development which refer to correlation between departure point and pace of change, and hypotheses taking into account variables explaining inter-individual differences in departure point and/or pace of change. Statistical model of latent developing curves is presented in terms of general model of structural equations. It also illustrates application of this model in case of research on effectiveness of nourishment in functioning of individuals suffering from Alzheimer disease. In conclusion I discuss limitations of the model of latent developing curves, its applications in analysis of non-complete data on development, and research projects which link cross-sectional and longitudinal approach.