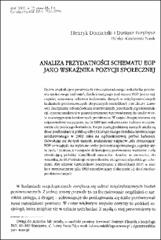 Validity of EGP as a measure of social position

This analysis aims at presentation of class schema constructed by Robert Erikson and John Goldthorpe referred to EGP. It is well-established and most widely employed coding schema in international research on social stratification. After short discussion of theoretical assumptions of the EGP we present rules of its operationalisation in terms of variables. Then we proceed to empirical test on validity of the EGP in the Polish case. Data comes from the Polish edition of European Social Survey carried out in 2002 on national sample. Our test resides in comparison of dicriminating power of EGP and Polish Sociological Classification with respect to selected variables referred to social status, attitudes and values. According to our findings explanatory power of EGP is much the same as Polish schema. In appendix we include SPSS modules which generates EGP codes based on information concerning: ISCO 88, self-employment and supervisory position.