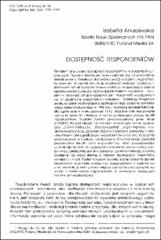 The article concerns the problem of respondent’s availability in survey research. This problem is not new and, as such, was broadly discussed in literature. However it is still important as the primary condition of survey realisation itself. The researchers are still concerned for response rate decreasing which could make the conclusions drawn from surveys unacceptable. The basis for present analysis is data coming from survey conducted in 1998 on the national representative sample. The research was carried out for 12 months and finally researchers gathered 36000 interviews. SMG/KRC POLAND Media by the order of the three publishers (Gazeta Wyborcza, Rzeczpospolita and Super Express) conducted the study. The results show the systematic relationships between the respondents characteristics and their availability in survey research. The analysis assumed the searching for such features of respondents, which could explain availability of respondents. According to intuition persons advanced in years, with lower incomes, living in smaller towns are more often available in survey research. I tried also to describe season phenomenon concerning respondents availability--the conclusion can be drawn that there are slightly more chance to conduct the interview with planned respondent in the first quarter of a year and on weekends.