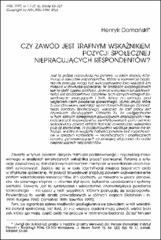 Is occupation a valid measure of social status in case of non-working respondents?

I attempt to determine to what extent data on occupational career from the past, reported by respondents non-working in the survey, are valid measure of their social status. I argue, here, that these procedure, often applied in the analyses, may be justified as far as non-working incumbents of occupational roles do not differ from their working counterparts with respect to important sociological variables. I refer to the data from the Polish General Social Survey. According to the findings presented here, there are substantial differences between working and non-working persons in their objective characteristics, views, and attitudes. It means that including under the same occupational label both, working and nonworking respondents (identified by their last reported job) increases social heterogeneity of occupational categories. The question is to what extent lower validity of occupation, resulting from such procedure, is counterweighted by its merits. In the concluding section I point out some analytical and theoretical rationale which justify application of the past job to measure social status of non-working respondents.