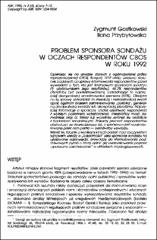 The question to determine is what respondents think about making them known the name of financial sponsor of the research. We attempted to resolve this issue empirically, basing on the representative random sample (N= 1212). The survey was carried out by the Centre for Social Opinion Research (CBOS). It shows that 46,3% of respondents would like to be informed on who sponsors research. Predominant part of them (61%) disapproved anonymity of the sponsor. Respondents indifferent to this issue emphasized such reasons as: stability of their opinions. independence of their views, general lock of interests in "politics", general disapproval of surveys, and their adherence to pluralism. Information about the sponsor was chiefly sought for by respondents graduated from high schools. urban dwellers. more wealthy as well as those who had some earlier experience with survey research. Tiny fraction declared that they would have refused taking part in the survey if sponsor had represented political option which they did not support.