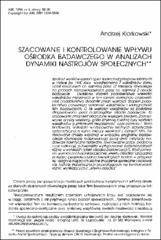 Seven public opinion indices which hod been measured in parallel in representative samples by at least two public opinion centres for at least 12 months were selected from a pool of findings of public opinion studies conducted in Poland after 1990. Similarity of the values of indices measured at the same point in time and similarity of the dynamics of these values were determined. A high degree of similarity was found, thus confirming the reliability of the indices and trustworthiness of the polling centres. Different polling stations obtained similar index values but their estimates of change were contaminated by a greater level of error. Analysis of variance, with the values of the indices as dependent variable and time of assessment and polling firm as independent variables, revealed significant and systematic differences between the findings of the different firms. Analysis of variance for a research programme realized simultaneously by two firms (identical research instruments, equivalent samples, similar time of realization) confirmed the existence of systematic differences in the findings ("polling firm effect"). The fact that such a "polling firm effect" was found justifies the need to conduct parallel opinion polls in those cases when the diagnosis is particularly important as well as the need to apply statistical techniques facilitating the control of differences due to the "polling firm effect".