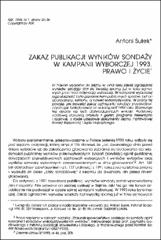 Ban on Publication of Results of Opinion Polls in 1993 Elections Campaign. Law and Life

In parliamentary election 1993, the ban on publication of results of opinion polls prompted a contentious debate already in preparation of the election rule. During electoral campaign it was overlooked, broken and exploited for political purposes. I will show, here, how this ban was enacted and how it worked in 1993 electoral campaign. Some conclusions with respect to this question will be made. The analysis is based on official documentation of Parliament, State Electoral Comission, the Highest Court as well as newspapers, TV and radio broadcastings.