Cytogenic Studies of Cyclohexylamine, a Metabolite of Cyclamate 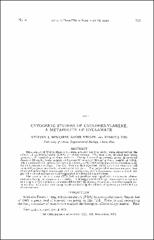 Nine wistar M W-3 pathogen-free rats, selected for this study, were observed for the effects of cyclohexylamine (CHA) on chromosomes. The rats were divided into three groups, each consisting of three animals. Group I served as control, group II received doses of 20 mg/kg body weight, and group III received 50 mg/kg body weight of CHA. The experiment ran for seven consecutive weeks, with CHA being injected intraperitoneally for five consecutive days. One day after the last injection, blood was taken from the tail vein and prepared in vitro for chromosome analysis. The prepared chromosomes were first observed under light microscope and oil immersion, and chromosome spreads which appeared to be abnormal were photographed for detailed examination. The results indicate that CHA did not produce any significant chromosme abnormalities during the course of this study. It is suggested that longer term experimentation utilizing a larger number of animals and employing in vitro technique should be considered in an effort to resolve conflicting results concerning the effects of cyclamates and CHA on chromosomes.