Doubling Time and Population Increase of the Amish 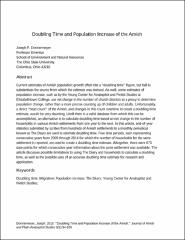 Current estimates of Amish population growth often cite a “doubling time” figure, but fail to substantiate the source from which the estimate was derived. As well, some estimates of population increase, such as by the Young Center for Anabaptist and Pietist Studies at Elizabethtown College, use net change in the number of church districts as a proxy to determine population change, rather than a more precise counting up of children and adults. Unfortunately, a direct “head count” of the Amish, and changes in this count overtime to create a doubling time estimate, would be very daunting, Until there is a valid database from which this can be accomplished, an alternative is to calculate doubling time based on net change in the number of households in various Amish settlements from one year to the next. In this article, end-of-year statistics submitted by scribes from hundreds of Amish settlements to a monthly periodical known as The Diary are used to estimate doubling time. Five time periods, each representing consecutive years from 2009 through 2014 for which the number of households for the same settlement is reported, are used to create a doubling time estimate. Altogether, there were 673 data-points for which consecutive year information about the same settlement was available. The article discusses possible limitations to using The Diary and households to calculate a doubling time, as well as the possible uses of an accurate doubling time estimate for research and application.