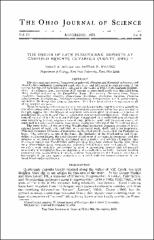 Illinoian sand and gravel, Sangamonian paleosol, Altonian and Farmdalian loesses, and Woodfordian sediments (laminated sand, silt, clay, and till) occur in superposition at the George Rackle and Sons Gravel Pit, situated in the valley of Mill Creek, Garfield Heights, Ohio. A molluscan fauna consisting of 17 species of terrestrial snails was identified from three studied sections of the Farmdalian loess. Ten species, Deroceras laeve, Discus cronkhitei, Gastrocopta armifera, Helicodiscus parallelus, Nesovitrea electrina, Punctum minutissimum, Strobilops sp., Triodopsis algonquinensis, Vertigo elatior, and V. gouldi hannai, are new to the Farmdalian loess of this area. Ten of the loess species do not occur at all of the sampled sections. These variations in the composition of the molluscan fauna, together with a consideration of the color and the structure of the Farmdalian loess examined at four sections within this pit, suggest that the deposition may have been interrupted by erosion, or a period of non-deposition, or both, and that it is probably steeply time-transgressive. Colluviation toward the end of the Farmdalian Substage is suggested by a contorted two- to six-inch zone containing broken, angular clasts of clay, pebbles, sand, and terrestrial snails, all contained in a silt (loess) matrix, that occurs locally near the top of the Farmdalian loess. The lower 6 feet of the overlying Woodfordian laminated sequence consists of intercalated layers of sand, silt, and clay, with scattered rock, shell, and plant fragments. This unit contained 12 species of terrestrial snails, all of which also occur in the Farmdalian loess. The terrestrial nature of the fauna, the similarity of the Woodfordian and Farmdalian snail assemblages, the total absence of pollen or of any aquatic organisms, and the presence of scattered clay-blebs, sand-sized quartz grains, and pebbles all suggest that the lower part of the Woodfordian sediments may have been derived locally from older units (Farmdalian loess, Sangamonian paleosol, and Illinoian sand and gravel). These materials were probably transported by some mass-wasting process and redeposited subaerially in topographic lows as slopewash, or as colluvium, or both. Layered modern sediments now accumulating in small, shallow depressions on the floors of abandoned borrow-pits in the area appear to simulate on a small scale the features observed in the basal Woodfordian sediments.