Synthesis of pyridine and pyridinium quinone methide precursors: studies towards the realkylation of aged acetylcholinesterase 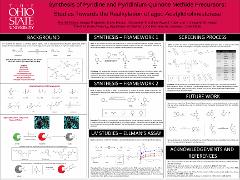 Acetylcholinesterase (AChE) is an essential enzyme in the human body, which hydrolyzes acetylcholine into choline for biochemical processes. Organophosphorus (OP) nerve-agents such as Sarin, Soman and Tabun are covalent inhibitors of AChE. Following exposure to OPs, inhibited AChE undergoes a subsequent irreversible aging process in which the OP-AChE adduct is de-alkylated (aged) resulting in the accumulation of excess acetylcholine in the central nervous system. Current oxime based pharmaceuticals can only be used to treat the inhibited AChE and are ineffective on the aged AChE. Our research focuses on the design of small molecules that can be used to re-alkylate aged AChE. Previous studies have shown that high energy quinone methides (QM) could potentially reverse the damage done to the active site on aged AChE through a kinetically favored alkylation of a phosphodiester. We have used computational chemistry to guide our synthetic efforts. We have developed methods to synthesize various quinone methide precusors; including pyridine and pyridinium compounds. The synthesis of these compounds and testing of them will be discussed. Mechanistic understanding on the formation of high energy quinone methides and optimization of the reactions for their formation is currently still in progress.