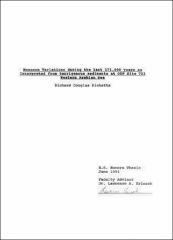 The bulk mineralogy of the terrigenous component in 65 samples from ODP Site 723, on the Oman margin, has been determined by x-ray diffraction, using an internal standard method. A detailed mineralogical record of the terrigenous input over the past 171 ky was developed from this data. Previous studies have identified important continental sediment source areas and the minerals derived from each source. Previous studies have also demonstrated that most of this terrigenous material is supplied by the southwest summer monsoon and associated northwest winds. Terrestrial records indicate increased aridity during glacial intervals and increased humidity during interglacial intervals. The mineralogical data generated by this study was used to investigate variations in source area weathering conditions and transport regimes during these climatic changes. Terrigenous minerals present include smectite, palygorskite, illite, quartz, plagioclase, chlorite, and dolomite, which is consistent with source areas presently supplying sediments to the Arabian Sea. An R-mode principal component analysis identified three mineral assemblages present throughout the past 171 ky: smectite/dolomite (Factor 1), quartz/plagioclase (Factor 2), and palygorskite/illite (Factor 3). Plagioclase, palygorskite, and illite are very susceptible to chemical weathering and therefore Factors 2 and 3 are interpreted to indicate changes in aridity or changes in importance of eolian transport. Smectite is formed during chemical weathering and dolomite is reduced in grain size by chemical weathering. Factor 1 indicates more humid source conditions and also the importance of source areas directly onshore from Site 723. Time-series of scores for the three factors indicate both short and long term variability, and do not correlate well to the expected fluctuations in climate predicted by glacial/interglacial intervals. This suggests that local climate shifts were more complex than a simple shift from arid to humid, and that mineral assemblages did not adjust immediately to shifts in climate.