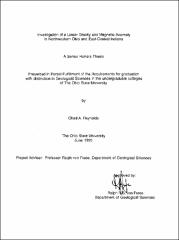 Geophysical investigations indicate that the source of a large, linear gravity and magnetic anomaly extending from east-central Indiana through northwestern Ohio may be an intrusive mafic dike or dike complex, that intruded the basement rocks of the region along preexisting fractures or faults. Geophysical modeling suggests that the source of the anomaly may be between 1000 meters and 3500 meters below the land surface and dipping to the southeast at between 35 degrees and 71 degrees. Modeling has also suggested that the density of the body is approximately 2.8g/cc and its effective magnetic susceptibility contrast is approximately 2596 x 106 cgs. Gravity and magnetic anomaly data indicate apparent left-lateral offset possibly due to left-lateral movement in the basement rocks prior to intrusion, or left-lateral strike-slip faulting that occurred after emplacement of the body. The dike complex also appears to be related to hydrocarbon accumulations in the overlying Trenton Limestone in Indiana, Ohio, and the Albion-Scipio oil field of Michigan.