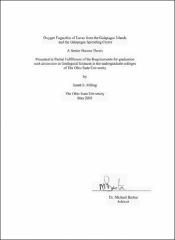 Oxygen fugacity is one of the most important intensive variables that controls the phase relations and compositions of precipitating minerals. It is accepted that oxygen fugacity reflects the redox state of the mantle source region. Therefore oxygen fugacities can be used to probe the mantle redox state and determine mantle heterogeneity. Plume-related magmas and mid-ocean ridge basalts (MORB) have been shown to fall within the same range (∆FMQ = -1.305 to 0.402) suggesting source regions with similar redox states. The Galapagos Islands are a result of plume-related volcanoes and located on thin, young crust created by the nearby Galapagos Spreading Center (GSC). This study focuses on the differences between the redox state of the Galapagos plume related magmas and the nearby GSC. The Galapagos Islands show usually high iron concentrations, which should be reflected in the fO₂ values of lavas. Values of fO₂ calculated from Fe₂O₃/FeO ratios for GSC lavas ranged from ∆FMQ = -1.801 to 0.402. Values calculated from coexisting olivine and melts show excellent agreement with a range of ∆FMQ = -1.818 to 0.069. There is reasonable correlation between oxygen fugacity and Mg, consistent with the idea of crystallization controlling oxygen fugacity. Oxygen fugacities were calculated from coexisting olivine and melt samples from Roca Redonda, Fernandina, and Volcan Darwin on the Galapagos Archipelago. Melt samples were based on groundmass analyses rather than glasses. The results ranged from ∆FMQ = -1.962 to -0.059, similar to values for MORB from the GSC, despite the unusually high Fe8.0 and low Si8.0 contents. The latter have been used to suggest that the island magmas are generated at greater depths than MORBs. This study supports other work suggesting that OIB from deeper mantle sources have similar oxygen fugacities to MORB from upper mantle sources. This suggests that both sources have similar redox states, or that differences are not observed in oxygen fugacities of magmas originating from these sources. In the case of the Galapagos Islands this is surprising, given other evidence for differences in melting temperature and depth and source region composition.